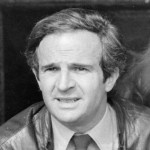 François Roland Truffaut was born in Paris, France. He was a French film director, screenwriter, producer, and actor. He directed such classics as The 400 Blows, Shoot the Piano Player, Jules et Jim, Stolen Kisses, The Wild Child, Two English Girls, Day for Night, The Man Who Loved Women, Love on the Run, and The Woman Next Door. His role in several films include: The 400 Blows, The Wild Child, Day for Night, The Man Who Loved Women, Close Encounters of the Third Kind, and The Green Room.