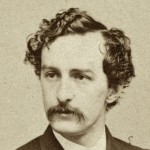 John Wilkes Booth was born in Bel Air, Maryland, USA. He was an American stage actor and assassin who murdered President Abraham Lincoln at Ford's Theatre in Washington, D.C. on April 14, 1865. He was also a Confederate sympathizer, vehement in his denunciation of Lincoln, and strongly opposed to the abolition of slavery in the United States. He shot Lincoln once in the back of the head, and the President died the next morning. On April 26, 1865, Booth was shot by Boston Corbett, a Union soldier, after the barn in which he was hiding was set ablaze. Booth made his stage debut at age 17 on August 14, 1855, in the supporting role of the Earl of Richmond in Richard III at Baltimore's Charles Street Theatre. In January 1862, he played the title role in Richard III in St. Louis and then made his Chicago debut. In May 1862, he made his Boston debut, playing nightly at the Boston Museum in Richard III, Romeo and Juliet, The Robbers, Hamlet, The Apostate, The Stranger, and The Lady of Lyons.