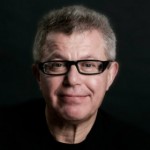 Daniel Libeskind was born in Łódź, Poland. He is a Polish-born American architect, professor and set designer. His buildings include the Jewish Museum in Berlin, Germany, the extension to the Denver Art Museum in the United States, the Grand Canal Theatre in Dublin, the Imperial War Museum North in Greater Manchester, England, the Michael Lee-Chin Crystal at the Royal Ontario Museum in Toronto, Canada, the Felix Nussbaum Haus in Osnabrück, Germany, the Danish Jewish Museum in Copenhagen, Denmark, and the Wohl Centre at the Bar-Ilan University in Ramat-Gan, Israel. On February 27, 2003, Libeskind won the competition to be the master plan architect for the reconstruction of the World Trade Center site in Lower Manhattan. Since 2007, Libeskind has been a visiting professor at the Leuphana University Lüneburg in Lüneburg, Germany.