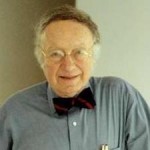 Harry Seidler was born in Vienna, Austria. He was an Austrian-born Australian architect who is considered to be one of the leading exponents of Modernism's methodology in Australia and the first architect to fully express the principles of the Bauhaus in Australia. He studied architecture at the University of Manitoba in Winnipeg, Canada, where he graduated with first class honours in 1944. He attended Harvard Graduate School of Design and Black Mountain College, North Carolina. He arrived in Sydney in 1948. His selected edifices include: Rose Seidler House, Australia Square Tower, Horizon Apartments, Blues Point Tower, Edmund Barton Building, MLC Centre, Embassy of Australia, Paris(with Marcel Breuer and Pier Luigi Nervi), Grosvenor Place, Riverside Centre, Hochhaus Neue Donau, Riparian Plaza, North Apartments, and Ian Thorpe Aquatic and Fitness Centre.