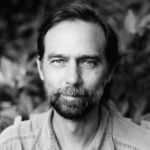 Charles de Lint was born in Bussum, Netherlands. He is a Canadian novelist, poet, writer and musician. De Lint writes novels, novellas, short stories, poetry, and lyrics. His most famous works include: The Newford series of books, as well as Moonheart, The Mystery of Grace, The Painted Boy and A Circle of Cats. He has also been a judge for the Nebula Award, the World Fantasy Award, the Theodore Sturgeon Award and the Bram Stoker Award. Besides being an author, he is also a musician, together with his wife MaryAnn. He plays multiple instruments and sings and writes his own songs. In 2011 De Lint released his first album, Old Blue Truck, which was released alongside his wife MaryAnn Harris's album, Crow Girls in which he also contributes. His main instruments are guitar, flute, fiddle, whistles and vocals.