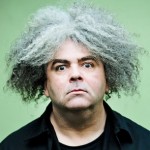 Buzz Osborne was born in Montesano, Washington. He is an American guitarist, record producer, singer and songwriter. He is also collaborated with various other artists such as Cows and Tool. Osborne is additionally a founding member/guitarist for both the groups Fantômas and Venomous Concept. He was a high school friend of Kurt Cobain and the bassist for Cobain's first band, Fecal Matter. In 1986, the band released their Six Songs EP on C/Z Records that was recorded live to a two track at Ironwood, February 8, 1986. In December 1986 they recorded their first full album, Gluey Porch Treatments, at Studio D in Sausalito, California, which was released in 1987 on Alchemy Records. In 1988, Osborne, with Crover, relocated to San Francisco where the band recorded their next album, Ozma, in May 1989.