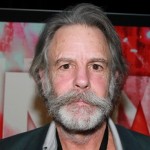 Bob Weir was born in San Francisco, California. He is an American singer, songwriter, and guitarist. After the Grateful Dead disbanded in 1995, Weir performed with The Other Ones, later known as The Dead, together with other former members of the Grateful Dead. Weir also founded and played in several other bands during and after his career with the Grateful Dead, including Kingfish, the Bob Weir Band, Bobby and the Midnites, Scaring the Children, RatDog, and Furthur, co-led by former Grateful Dead bassist Phil Lesh. During his career with the Grateful Dead, Weir played mostly rhythm guitar and sang many of the band's rock-n-roll tunes. As a guitarist, he is known for his unique style of complex voiceleading, bringing unusual depth and a new approach to the role of rhythm guitar expression. He began playing guitar at age thirteen after less successful experimentation with the piano and the trumpet.