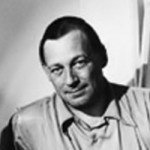 Hugo Alvar Henrik Aalto was born in Kuortane, Finland. He was a Finnish architect and designer, as well as a sculptor and painter. His work includes architecture, furniture, textiles and glassware. His furniture designs were considered Scandinavian Modern. What is typical for his entire career, however, is a concern for design as a Gesamtkunstwerk, a total work of art; whereby he – together with his first wife Aino Aalto – would design not just the building, but give special treatments to the interior surfaces and design furniture, lamps, and furnishings and glassware. The Alvar Aalto Museum, designed by Aalto himself, is located in what is regarded as his home city Jyväskylä. Aalto studied at the Jyväskylä Lyceum school, completing his basic education in 1916. In 1916 he then enrolled to study architecture at the Helsinki University of Technology. He built his first piece of architecture while still a student, a house for his parents, at Alajärvi. Aalto also entered several architectural competitions for prestigious state public buildings, both in Finland and abroad, including the two competitions for the Finnish Parliament building in 1923 and 1924, the extension to the University of Helsinki in 1931, and the building to house the League of Nations in Geneva, Switzerland, in 1926–27.