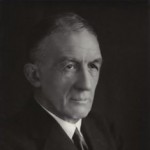 Sir Herbert Baker was born in Cobham, Kent, England. He was a British architect remembered as the dominant force in South African architecture for two decades. With Edwin Lutyens he was instrumental in designing, among other buildings, the Rashtrapati Bhavan, Parliament and North and South Blocks of the Secretariat, all in New Delhi, India. In 1891, he passed his examination for Associateship of the Royal Institute of British Architects and was awarded the Ashpitel Prize for being top of his class. He received a knighthood in 1926. His autobiography Architecture & Personalities was published in 1944. His selected edifices in South Africa include: St Boniface Church, Germiston; Grey College, Bloemfontein; Groote Schuur, Cape Town; Pretoria railway station, Pretoria; Rhodes Memorial, Cape Town; Rhodes University, Grahamstown; St. Andrew's College, Grahamstown; St. George's Cathedral, Cape Town; St John's College, Johannesburg; Union Buildings, Pretoria; and Villa Arcadia, Johannesburg.