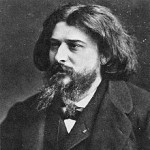 Alphonse Daudet was born in Nîmes, France. He was a French novelist. In 1866, Daudet's Lettres de mon moulin, written in Clamart, near Paris, and alluding to a windmill in Fontvieille, Provence, won the attention of many readers. The first of his longer books, Le petit chose, did not, however, produce popular sensation. Henceforward his career was that of a successful man of letters, mainly spent writing novels: Le Nabab, Les Rois en exil, Numa Roumestan, Sapho, L'Immortel, and writing for the stage: reminiscing in Trente ans de Paris and Souvenirs d'un homme de lettres. Daudet also wrote for children, including La Belle Nivernaise, the story of an old boat and her crew.