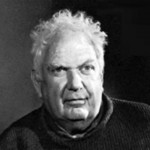 Alexander "Sandy" Calder was born in Lawnton, Pennsylvania. His father, Alexander Stirling Calder, was a well-known sculptor who created many public installations, a majority of them in Philadelphia. In 1902, Calder posed nude for his father’s sculpture The Man Cub, which is now located in the Metropolitan Museum of Art in New York City. That year, he completed his earliest sculpture, a clay elephant. In 1909, when Calder was in the fourth grade, he sculpted a dog and a duck out of sheet brass as Christmas gifts for his parents. The sculptures were three dimensional and the duck was kinetic because it rocked when gently tapped. Alexander Calder’s high school years between 1912 and 1915. He could graduate from Lowell High School in San Francisco. Calder graduated in the class of 1915.
In the summer of 1916, Calder spent five weeks training at the Plattsburg Civilian Military Training Camp. In 1918, he joined the Student’s Army Training Corps, Naval Section, at Stevens and was made guide of the battalion In 1919, Calder decided to study mechanical engineering, and enrolled at the Stevens Institute of Technology in Hoboken, New Jersey. He was a member of the Delta Tau Delta fraternity and excelled in mathematics. Calder received a degree from Stevens in 1919. For the next several years, he held a variety of engineering jobs, including working as a hydraulic engineer and a draughtsman for the New York Edison Company. In June 1922, Calder found work as a mechanic on the passenger ship H. F. Alexander. While the ship sailed from San Francisco to New York City, Calder worked on deck off the Guatemalan Coast and witnessed both the sun rising and the moon setting on opposite horizons.
In 1926, Calder moved to Paris where he established a studio at 22 rue Daguerre in the Montparnasse Quarter. In 1955 Alexander Calder travelled around in India for three months, where Calder produced nine sculptures as well as some jewellery.
Calder died unexpectedly on November 11, 1976, shortly after opening a major retrospective show at the Whitney Museum in New York.