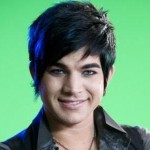 Adam Mitchel Lambert is an American singer-songwriter and stage actor born in Indianapolis but raised in San Diego. He began performing in amateur theatrical productions in childhood, a path he pursued into adulthood, appearing in professional productions in the U.S. and abroad. Lambert began performing with Metropolitan Educational Theatre network from the age of nine, and appeared in local productions of You're a Good Man, Charlie Brown and Fiddler on the Roof with the company. A few years later, he began more intense acting and vocal coaching, continuing to perform with both MET2 and what was to become the Broadway Bound Youth Theatre Foundation, as he moved through Mesa Verde Middle School and then high school. While attending Mount Carmel High School, he became heavily involved with theater and choir, performed vocals with the school's jazz band, MC Jazz, and competed in the local Air Bands competitions. Some of his MCHS performances included Frederic in The Pirates of Penzance and "It's Only a Paper Moon" with MC Jazz. Lambert auditioned for Starlight Theatre, a professional outdoor theater company in Balboa Park, where he performed in the ensemble for Hello, Dolly!, Camelot, The Music Man, Grease and as Captain Hook in Peter Pan. After graduating in 2000, he attended California State University, Fullerton., but left school after five weeks and moved to Los Angeles: "I just decided that what I really wanted to do was try to work in the real entertainment world," he said. "Life is all about taking risks to get what you want."