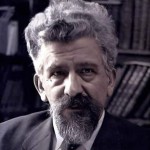 Abraham Joshua Heschel was a Polish born American rabbi and one of the leading Jewish theologians and Jewish philosophers of the 20th century. Abraham Joshua Heschel was descended from preeminent European rabbis on both sides of the family. His great-great-grandfather and namesake was Rebbe Avraham Yehoshua Heshel of Apt.His siblings were Sarah, Dvora Miriam, Esther Sima, Gittel, and Jacob. In late October 1938, when he was living in a rented room in the home of a Jewish family in Frankfurt, he was arrested by the Gestapo and deported to Poland. He spent ten months lecturing on Jewish philosophy and Torah at Warsaw's Institute for Jewish Studies. Heschel arrived in New York City in March 1940. He served on the faculty of Hebrew Union College, the main seminary of Reform Judaism, in Cincinnati for five years. In 1946, he took a position at the Jewish Theological Seminary of America, the main seminary of Conservative Judaism, where he served as professor of Jewish ethics and Mysticism until his death in 1972. Heschel married Sylvia Straus, a concert pianist, on December 10, 1946, in Los Angeles. Their daughter, Susannah Heschel, is a Jewish scholar in her own right. Heschel's papers are held in the Rubenstein Rare Book & Manuscript Library at Duke University.