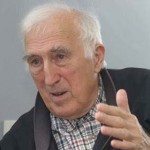 Jean Vanier was born in Geneva, Switzerland. He is a Canadian Catholic philosopher and humanitarian. He is the son of Major-General Georges Vanier who became the 19th Governor General of Canada from 1959-1967. In 1964, he founded L'Arche, an international federation of communities spread over 37 countries, for people with developmental disabilities and those who assist them. Over the years, he has authored 30 books on religion, disability, normality, success, and tolerance. He wrote several books include: Tears of silence, Community & growth, The Broken Body, From brokenness to community, Jesus, the gift of love, The heart of l'Arche, Becoming Human, Seeing Beyond Depression, and Befriending the Stranger. He received are the Companion of the Order of Canada, Grand Officer of the National Order of Quebec, French Legion of Honour, Community of Christ International Peace Award, the Pacem in Terris Peace and Freedom Award, and the Templeton Prize.