When God allows something to be taken from you, he replaces it with something better.

The future is as bright as the promises of God.

When you say a situation or a person is hopeless, you are slamming the door in the face of

Those who want the fewest things are nearest to the gods.

When you focus on being a blessing, God makes sure that you are always blessed in abundanc

Comments on: "Janette Oke Quotes: When God allows something to be taken from you, he replaces it with..." 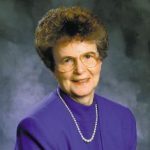