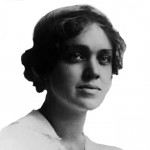 Agnes Smedley was an American journalist and writer best known for her semi-autobiographical novel Daughter of Earth. She was also known for her sympathetic chronicling of the Chinese revolution. During World War I, she worked in the United States for the independence of India from Great Britain, receiving financial support from the government of Germany, and for many years worked for or with the Comintern, promoting world revolution. She worked on behalf of various causes including women's rights, birth control, and children's welfare. Smedley wrote six books, including a novel, reportage, and a biography of the Chinese general Zhu De, reported for newspapers such as New York Call, Frankfurter Zeitung and Manchester Guardian, and wrote for periodicals such as the Modern Review, New Masses, Asia, New Republic, and Nation.