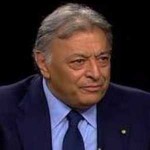 Zubin Mehta is an Indian conductor of western classical music. He is the Music Director for Life of the Israel Philharmonic Orchestra.
Zubin Mehta was born into a Parsi family in Bombay, British India, the son of Mehli and Tehmina Mehta. His father Mehli Mehta was a violinist and founding conductor of the Bombay Symphony Orchestra. Mehta is an alumnus of St. Mary's School, Mumbai, and St. Xavier's College, Mumbai. Mehta initially intended to study medicine, but eventually became a music student in Vienna at the age of 18, under Hans Swarowsky. Also at the same academy along with Mehta were conductor Claudio Abbado and conductor–pianist Daniel Barenboim.
Mehta's first marriage was to Canadian soprano Carmen Lasky in 1958. They have a son, Mervon and a daughter, Zarina. In 1964, they divorced. Two years after the divorce, Carmen married Zubin's brother, Zarin Mehta, now the Executive Director of the New York Philharmonic. In July 1969, Mehta married Nancy Kovack, a former American film and television actress. Mehta is a permanent resident of the United States, but retains his Indian citizenship.