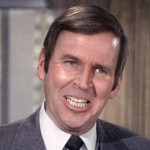 Paul Lynde was born in Mount Vernon, Ohio, and studied drama at Northwestern University in Evanston, Illinois, where his fellow students included Cloris Leachman, Charlotte Rae, Patricia Neal, Jeffrey Hunter and Claude Akins. At Northwestern, he joined the Upsilon chapter of Phi Kappa Sigma and is listed amongst the most famous members of the fraternity. He graduated in 1948 and moved to New York City, where he initially worked as a stand-up comic. Paul Lynde's sexual orientation was something of an open secret in Hollywood, although, in keeping with the prejudices and social mores of the time, it was not acknowledged or discussed in public. In 1965, Lynde was involved in an accident in which a young actor, reputed to be his lover, fell to his death from the window of their hotel room in San Francisco's Sir Francis Drake Hotel. The two had been drinking for hours before 24-year-old James "Bing" Davidson slipped and fell eight stories, an event witnessed by two policemen. Yet, the event was largely kept out of the press, thus saving his career. Despite his campy television persona, Lynde never publicly came out as being gay and the press generally went along with the deception. In 1976, a People magazine article on Lynde featured him and Stan Finesmith, the latter was dubbed Lynde's "suite mate" and “chauffeur-bodyguard.” In the 1970s, this was as close as the press would come to hinting at his sexuality. In 1978, Lynde was arrested outside of a gay bar in Salt Lake City. As a result of the arrest, he lost his guest starring role on The Donny and Marie Show. Increasingly in the late 1970s, acting jobs became harder for him to find, although it is unclear if this was because of anti-gay prejudice or his substance abuse problems, which often made him difficult to work with. He had been arrested for drunk driving and, while under the influence of alcohol, he was known to make rude and racist public comments to people. Lynde finally became sober and drug free in the early 1980s, shortly before his death. Lynde also suffered from weight control problems, along with substance abuse and was honored in 1977 by Weight Watchers. Lynde was found dead in his Beverly Hills, California, home by friend Paul Barresi on Monday, January 11, 1982. The coroner ruled the death a heart attack. Lynde's cremated remains are interred at Amity Cemetery, in Amity, Ohio, where he is buried next to his brother Johnny and sister Helen. Paul Lynde's popularity has continued after his death. According to cartoon creator/voice actor Seth McFarlane, the voice of Roger the Alien on the Fox television show American Dad! was modelled after him. The voice and humor of Queer Duck character Bi-Polar Bear, is also done in the style of Paul Lynde, as was the supervillain The Scoutmaster in the Simpsons episode Radioactive Man. Steve Carell reprised Lynde's role as "Uncle Arthur" in the 2005 film Bewitched, very much in Lynde's style. The voice and humor of William A. Mummy on the new GSN game show Late Night Liars is performed in the vein of Paul Lynde as well. Actor/comedian Michael Airington also plays Paul Lynde in the show Oh My Goodness it's Paul Lynde. He plays him in An Evening with Paul Lynde recreating Lynde's 1976 live show and in Off Center: The Paul Lynde Show. Airington licenses the rights from the Paul Lynde Estate.