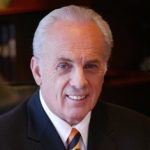 John Fullerton MacArthur Jr. was born in Los Angeles, California, USA. He is an American pastor, educator and author noted for his radio program entitled Grace to You and as the editor of the Gold Medallion Book Award winning MacArthur Study Bible. He studied at Bob Jones University and Los Angeles Pacific College. He earned an MDiv degree from Talbot Theological Seminary, Biola University. He served as an associate pastor at Calvary Bible Church, Burbank, California and as a faculty representative for Talbot Theological Seminary. In 1969, he became the third pastor of the nondenominational Grace Community Church of Sun Valley, California. He is also the current president of The Master's University in Newhall, California and The Master's Seminary in Los Angeles, California. He has written several books include: Twelve Extraordinary Women, Twelve Ordinary Men, One Perfect Life, Anxious for Nothing, Gospel According to Jesus, Charismatic Chaos, Ashamed of the Gospel, The Jesus You Can't Ignore, Strange Fire, The Gospel According to Paul, and Slave: The Hidden Truth About Your Identity in Christ.