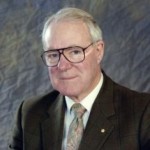 Sir John Warcup Cornforth Jr. was born in Sydney, New South Wales, Australia. He was an Australian-British chemist who won the Nobel Prize in Chemistry in 1975 (Shared with Vladimir Prelog) for his work on the stereochemistry of enzyme-catalysed reactions. He investigated enzymes that catalyse changes in organic compounds, the substrates, by taking the place of hydrogen atoms in a substrate's chains and rings. He graduated with a Bachelor of Science in organic chemistry (First-Class Honours) from the University of Sydney in 1937. He received his PhD in Organic Chemistry from Oxford University in 1941. He married Rita Harriet Harradence (Organic Chemist) in 1941, with whom he would have one son, John, and two daughters, Brenda and Philippa. In 1946, he joined the Medical Research Council, working at the National Institute for Medical Research. He served as a professor of Molecular Science at the University of Warwick from 1965-1972. He served as a Royal Society Research Professor at the University of Sussex from 1975-1982. He received many Honours and awards, including Davy Medal, Elected a Fellow of the Royal Society in 1953, Commander of the Order of the British Empire, Australian of the Year Award (with Maj. Gen. Alan Stretton), Royal Medal, Knight Bachelor, Fellow of the Australian Academy of Science, Copley Medal, and Centenary Medal.