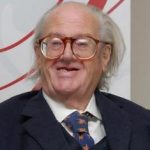 Sir John Clifford Mortimer was born in Hampstead, London, England. He was an English barrister, playwright, novelist and screenwriter. He earned a BA degree from Brasenose College, Oxford in 1943. He was called to the Bar in 1948, at the age of 25. His early career consisted of testamentary and divorce work, but on taking silk in 1966, he began to undertake work in criminal law. He was also defence counsel at the Oz conspiracy trial later in 1971. He retired from the bar in 1984. He was knighted in 1998. He wrote several novels include: Charade, Rumpole's Return, Summer's Lease, and The Sound of Trumpets. He wrote several plays include: The Dock Brief, The Wrong Side of the Park, Two Stars for Comfort, The Judge, and A Voyage Round My Father. He wrote several films include: The Innocents, Bunny Lake Is Missing, A Flea in Her Ear, John and Mary, Maschenka, and Tea with Mussolini.