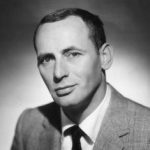 Joseph Abraham Gottlieb, known professionally as Joey Bishop was born in The Bronx, New York City, New York, USA. He was an American actor, comedian and talk show host. He appeared on The Ed Sullivan Show in 1950, The Dinah Shore Chevy Show in 1957, and many other variety programs in the early days of television. His role in several films include: The Deep Six, The Naked and the Dead, Onionhead, Ocean's 11, Sergeants 3, Johnny Cool, Texas Across the River, The Delta Force, Betsy's Wedding, and Mad Dog Time. His role in television include: The Joey Bishop Show (talk show host) and The Tonight Show (guest host).