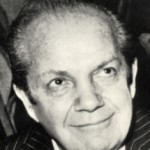 Joey Adams was born in Brooklyn, New York City, New York, USA. He was an American comedian. His role in several films include: Ringside, Singing in the Dark, and Don't Worry, We'll Think of a Title. His role in television include: Back That Fact (game show host). He wrote the Strictly for Laughs column in the New York Post. His wife, Cindy Adams, remains a gossip columnist for the same paper. He was appointed as Commissioner of Youth for the City of New York by Mayor Robert F. Wagner, Jr. He also hosted for a while his own radio show and wrote 23 books, including From Gags to Riches (Autobiography), Joey Adams Joke Book, Strictly for Laughs, On the Road for Uncle Sam, The Borscht Belt, Laugh Your Calories Away, Encyclopedia of Humor, The God Bit, Here's to the Friars, Live Longer Through Laughter, and Roast of the Town.