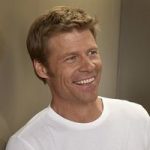 Joel James Gretsch was born in St. Cloud, Minnesota, USA. He is an American actor. He was raised Catholic. His role in several films include: The Legend of Bagger Vance, Minority Report, The Emperor's Club, Shrink, Saving Grace B. Jones, Push, Are You Here, Safelight, Silent War (short film, also director, writer), and Dead Trigger. His role in television include: Family Album (miniseries), Taken (miniseries), The 4400 (science fiction TV series), and V (TV series). He married to Melanie Ann Shatner in 1999. They have two daughters.