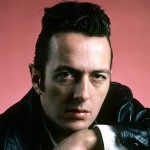 John Graham Mellor, known by his stage name Joe Strummer was born in Ankara, Turkey. He was an English musician, singer, actor and songwriter who was the co-founder, lyricist, rhythm guitarist and lead vocalist of the Clash, a punk rock band formed in 1976 as part of the original wave of British punk. His albums list shown below: Earthquake Weather and Global Agogo. His albums list (with The Clash) shown below: The Clash, Give 'Em Enough Rope, London Calling, Sandinista!, Combat Rock, and Cut the Crap. His role in several films include: Rude Boy, Walker (also musician), Straight to Hell, Candy Mountain, Mystery Train, The Clash (documentary film), End of the Century (documentary film), and Let's Rock Again! (documentary film). He studied at Central School of Art and Design in London.