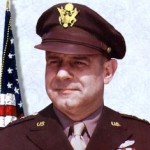 James Harold "Jimmy" Doolittle was born in Alameda, California, USA. He was an American aviation pioneer. He earned a BA degree from the University of California at Berkeley in 1922. He received his MS degree in Aeronautics in 1924 and his Sc.D in Aeronautics in 1925 both from Massachusetts Institute of Technology. A Reserve officer in the United States Army Air Corps, he was recalled to active duty during World War II. He was awarded the Medal of Honor for personal valor and leadership as commander of the Doolittle Raid, a bold long-range retaliatory air raid on the Japanese main islands, on 18 April 1942, four months after the Attack on Pearl Harbor. He received several medals and honors, including Air Medal, Distinguished Flying Cross, Distinguished Service Medal, Congressional Medal of Honor, Presidential Medal of Freedom (1989), Bronze Star, Silver Star, and French Legion of Honor. He is the author of book, entitled I Could Never Be So Lucky Again (with Carroll V. Glines, autobiography).