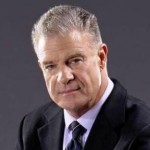 Jim Lampley was born in Hendersonville, North Carolina, USA. He is an American sportscaster, news anchor and TV journalist. He earned a BA degree in English in 1971 and an MA degree in Mass Communications in 1974 both from the University of North Carolina, Chapel Hill. He has covered a record 14 Olympic Games on U.S. television, most recently the 2008 Summer Olympics in Beijing, China. From 1983 to 1985, he was the studio host of ABC broadcasts of the United States Football League. In 1987, he moved to CBS. At CBS, he took over duties as co-anchor on the daily news show in Los Angeles, and also was a correspondent. That same year, he began working for HBO, covering boxing and HBO's annual telecast of Wimbledon. He also attended the Albertville Olympics in 1992, as a news anchor for KCBS-TV. In 1992, he moved to NBC, where he helped cover the 1992 Barcelona Olympics, 1993 Ryder Cup, and the 1996 Atlanta Olympics. In 1992, he won the Sam Taub Award for excellence in boxing broadcasting journalism. For his participation in the Real Sports with Bryant Gumbel HBO series, he earned three Emmy awards. He was inducted into the International Boxing Hall of Fame in its 2015 class.