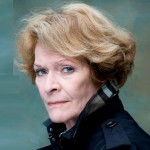 Dame Janet Suzman was born in Johannesburg, South Africa. She is a South African actress. She studied English and French at the University of the Witwatersrand. She moved to London in 1959. After training for the stage at the London Academy of Music and Dramatic Art she made her debut as Liz in Billy Liar at the Tower Theatre, Ipswich, in 1962. She became a member of the Royal Shakespeare Company in 1963 and started her career there as Joan of Arc in The Wars of The Roses from 1962-1964. Her role in several films include: Nicholas and Alexandra(Nominated- Academy Award for Best Actress, BAFTA Award for Most Promising Newcomer to Leading Film Roles, Golden Globe Award for New Star of the Year- Actress), A Day in the Death of Joe Egg, The Black Windmill, Voyage of the Damned, Priest of Love, A Dry White Season, Nuns on the Run, Leon the Pig Farmer, and Felix. Her role in television include: Lord Raingo(TV series), The Three Sisters(TV drama), The Midsummer Marriage(TV film), The Singing Detective(TV miniseries), and The Color of Magic (TV miniseries).