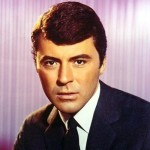 James William Ercolani, known by his stage name James Darren was born in Philadelphia, USA. He is an American actor and singer. He began his career as a teen idol, having been discovered by talent agent and casting director Joyce Selznick. His role in several films include: Rumble on the Docks, The Brothers Rico, Gunman's Walk, Gidget,All the Young Men, Gidget Goes Hawaiian, Diamond Head, The Lively Set, and Venus in Furs. His role in television include: The Lives of Jenny Dolan(TV film), The Time Tunnel(TV series), and Baa Baa Black Sheep (TV series). His albums list shown below: The Best of James Darren, This One's from the Heart, Because of You, Love Songs from the Movies, Love Along the Young, and Teenage Triangle(with Shelley Fabares and Paul Petersen). His songs list shown below: "Goodbye Cruel World" and "Her Royal Majesty".