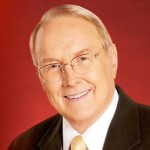 James Clayton "Jim" Dobson, Jr. was born in Shreveport, Louisiana, USA. He is an American psychologist, evangelical Christian author, radio personality and founder in 1977 of Focus on the Family, which he led until 2003. He earned a BA degree in Psychology from Pasadena College(now Point Loma Nazarene University) in 1958. He earned an MS degree from the University of Southern California in 1962. He received his PhD in Child Development from the University of Southern California in 1967. He was an Associate Clinical Professor of Pediatrics at the University of Southern California School of Medicine for 14 years. He spent 17 years on the staff of the Children's Hospital of Los Angeles in the Division of Child Development and Medical Genetics. He is a licensed psychologist in the State of California. He founded Family Talk as a non-profit organization in 2010 and launched a new radio broadcast, "Family Talk with Dr. James Dobson", that began on May 3, 2010 on over 300 stations nationwide. He has written several books include: Dare to Discipline, The Strong-Willed Child, Love Must Be Tough, Love for a Lifetime, Children at Risk(with Gary Lee Bauer), The New Dare to Discipline, Life on the Edge, Bringing Up Boys, Marriage Under Fire, and Bringing Up Girls.