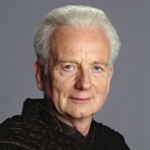 Ian McDiarmid was born in Carnoustie, Scotland. He is a Scottish character actor. Internationally, he is most famous for his role as Palpatine in the Star Wars film series. He received an MA degree in psychology from Queens College, Dundee, the University of St Andrews. He took acting training courses at the Royal Scottish Academy of Music and Drama in Glasgow. In 1968, he received a gold medal for his work, the first of many recognitions given to him for his work in the theatre. He has starred in a variety of Shakespeare plays, including Hamlet, The Tempest, Much Ado About Nothing, Macbeth, The Merchant of Venice, King Lear, and Timon of Athens. In 2002, he won Almeida Theatre's Critic's Circle Award for Best Actor for his role as Teddy in a revival of Brian Friel's Faith Healer. Five years later in 2006, he reprised this role in his debut on Broadway. Directed by Kent, he performed alongside Ralph Fiennes and Cherry Jones, and won the Tony Award for Best Performance by a Featured Actor in a Play. His role in several films include: The Likely Lads, The Awakening, Return of the Jedi, Restoration, and Sleepy Hollow. His role in television include: Charles II: The Power and The Passion(TV film), City of Vice(TV series), Margaret(TV film), 37 Days (TV series), and Utopia (TV series).