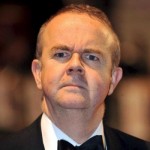 Ian David Hislop was born in Mumbles, Swansea, Wales. He is a British journalist, satirist, writer, comedian, TV presenter and editor of the magazine Private Eye. He has appeared on many radio and television programmes, and is a team captain on the BBC quiz show Have I Got News for You. He educated at Ardingly College. He graduated with a BA in 1981. His television debut was on the short-lived Channel 4 chat show Loose Talk in 1983. He was a scriptwriter on the 1980s political satire series Spitting Image(with Nick Newman). He has written the BBC Radio 4 series Gush, and family-friendly satirical sitcom My Dad's the Prime Minister(with Nick Newman). In 2003, he was listed in The Observer as one of the 50 funniest acts in British comedy. He has written several films include: The Wipers Times, A Bunch of Amateurs, and Gobble. He has written several books include: The Feeling Being, Battle for Britain(with Nick Newman), Stress, Distress, and Illness, and Son of Blair.