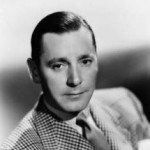 Herbert Brough Falcon Marshall was born in London, England. He was an English stage, screen and radio actor who in spite of losing a leg during the First World War, starred in many popular and well-regarded Hollywood films in the 1930s and 1940s. His role in several films include: Mumsie, Secrets of a Secretary, Trouble in Paradise, The Lady Consents, Woman Against Woman, Foreign Correspondent, The Letter, The Little Foxes, The Moon and Sixpence, The Razor's Edge, The Weapon, The Fly, The Caretakers, and The Third Day. From 1944-1952, he starred in his own radio series, The Man Called 'X'.