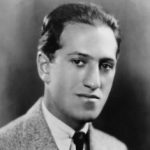 George Gershwin was born in  Brooklyn, New York City, New York, USA. He was an American composer, pianist, and songwriter. His compositions spanned both popular and classical genres, and his most popular melodies are widely known. Among his best-known works are the orchestral compositions Rhapsody in Blue and An American in Paris as well as the opera Porgy and Bess. His compositions have been adapted for use in many films and for television, and several became jazz standards recorded in many variations. Many celebrated singers and musicians have covered his songs. He wrote numerous songs for stage and screen that quickly became standards, including “Oh, Lady Be Good!” “Someone to Watch over Me,” “Strike Up the Band,” “Embraceable You,” “Let’s Call the Whole Thing Off” and “They Can’t Take That Away from Me.” In 1937, at the height of his career, he was nominated posthumously by the Academy Awards for Best Original Song – They Can t Take That Away From Me, composed for the 1937 musical film Shall We Dance, starring Ginger Rogers and Fred Astaire. The Congressional Gold Medal was awarded to George and Ira Gershwin in 1985. A special Pulitzer Prize was posthumously awarded to Gershwin in 1998.