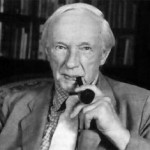 George Edward "G. E." Moore was born in Upper Norwood, London, England. He was an English philosopher. He was, with Bertrand Russell, Ludwig Wittgenstein, and Gottlob Frege, one of the founders of the analytic tradition in philosophy. Along with Russell, he led the turn away from idealism in British philosophy, and became well known for his advocacy of common sense concepts, his contributions to ethics, epistemology, and metaphysics, and "his exceptional personality and moral character." He was educated at Dulwich College and Trinity College Cambridge to study classics for moral sciences. He was Professor of Philosophy at the University of Cambridge from 1925 to 1939. He wrote several books include: Principia Ethica, Philosophical Studies, Some Main Problems of Philosophy, Philosophical Papers, and Commonplace Book, 1919-1953.