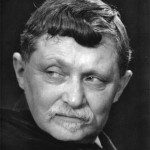 Gabriel Honoré Marcel was born in Paris, France. He was a French philosopher, author, music critic, and playwright. The author of over a dozen books and at least thirty plays, Marcel's work focused on the modern individual's struggle in a technologically dehumanizing society. He earned his Ph.D. in philosophy from the Sorbonne in 1910. The Mystery of Being is a well-known two-volume work authored by Marcel. He wrote several books include: Being and Having, Man Against Mass Society, Homo Viator, The Decline of Wisdom, Presence and Immortality, Royce's Metaphysics, Problematic Man, Creative Fidelity, and Tragic Wisdom and Beyond. He wrote several plays include: A Just One, The Unfathomable, The Rebellious Heart, A Man of God, The Yoke or the Noose, The Broken World, Ariadne, Dot the I, Colombyre or the Torch of Peace, and Rome n’est plus dans Rome.