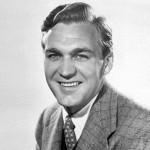 Forrest Meredith Tucker was born in Plainfield, Indiana, USA. He was an American actor who appeared in nearly a hundred films. His role in several films include: The Westerner, The Great Awakening, Emergency Landing, Keeper of the Flame, The Yearling, Never Say Goodbye, Sands of Iwo Jima, Rock Island Trail, California Passage, Rage at Dawn, The Abominable Snowman, and The Quiet Gun. His role in television include: F Troop, Dusty's Trail, The Ghost Busters, and Timestalkers.