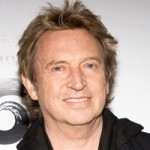 Andy Summers is an English multi-instrumentalist, born in Poulton-le-Fylde, Lancashire, England. Best known as the guitarist for rock band The Police, he has also recorded twelve solo albums, collaborated with many other artists, toured extensively under his own name, published several books, and composed several film scores. Rolling Stone magazine ranked Summers as the eighty fifth greatest guitarist of all time. Summers' professional career began in the mid-1960s in London as the guitarist for the British rhythm and blues band Zoot Money's Big Roll Band, which eventually came under the influence of the spreading psychedelic scene and evolved into the acid rock group Dantalian's Chariot. Summers achieved international fame as the guitarist for The Police, which he joined in 1977, replacing original guitarist Henri Padovani. During his tenure with the band, Summers twice won the Grammy Award for Best Rock Instrumental Performance, first with "Reggatta de Blanc", and then with his song "Behind My Camel" in 1980. In 2007, the French Government appointed Summers a Chevalier of the Ordre des Arts et des Lettres. In 2008, he was awarded an honorary doctorate by Bournemouth University.