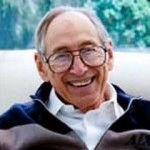 Alvin Toffler was born in New York city in 1928. Their hands-on practical labor experience got Toffler a position on a union-backed newspaper, a transfer to its Washington bureau, then three years as a White House Correspondent covering Congress and the White House for a Pennsylvania daily. Meanwhile his wife worked at a specialized library for business and behavioral science. They returned to New York City when Fortune magazine invited Alvin to become its labor columnist, later having him write about business and management.
After leaving Fortune magazine, Alvin Toffler was hired by IBM to do research and write a paper on the social and organizational impact of computers, leading to his contact with the earliest computer “gurus” and artificial intelligence researchers and proponents. Xerox invited him to write about its research laboratory and AT&T consulted him for strategic advice. This AT&T work led to a study of telecommunications which advised its top management for the company to break up more than a decade before the government forced AT&T to break up.
In the mid-’60s the Tofflers began work on what would later become Future Shock.
In 1996, with Tom Johnson, an American business consultant, they co-founded Toffler Associates, an advisory firm designed to implement many of the ideas the Tofflers have written on. The firm worked with businesses, NGOs, and governments in the U.S., South Korea, Mexico, Brazil, Singapore, Australia and other countries.