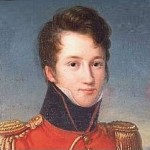 Alfred de Vigny was born in Loches into an aristocratic family. In 1814, Vigny enrolled in one of the privileged aristocratic companies of the Maison du Roi. Always attracted to letters and versed in French history and in knowledge of the Bible, he began to write poetry. He published his first poem in 1820, published an ambitious narrative poem entitled Eloa in 1824 on the popular romantic theme of the redemption of Satan. Prolonging successive leaves from the army, he settled in Paris with his young English bride, Lydia Bunbury.
He collected his recent works in January 1826 in Poèmes antiques et modernes. Three months later, he published a substantial historical novel, Cinq-Mars, based on the life of Henri Coiffier de Ruzé, Marquis of Cinq-Mars; with the success of these two volumes, Vigny seemed to be the rising star of the burgeoning Romantic movement, though this role would soon be usurped by one of Vigny's best friends, Victor Hugo.
An English theater troupe visiting Paris in 1827 having revived French interest in Shakespeare, Vigny worked with Emile Deschamps on a translation of Romeo and Juliet (1827). In 1831, he presented his first original play, La Maréchale d'Ancre, a historical drama recounting the events leading up to the reign of King Louis XIII. Frequenting the theater, he met the great actress Marie Dorval, and became her jealous lover until 1838.
Vigny died in Paris on 17 September 1863, a few months after the passing of his wife, and is buried beside her in the Cimetière de Montmartre in Paris, France.