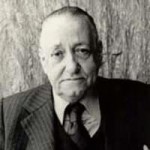 Alejo Carpentier y Valmont was a Cuban novelist, essayist, and musicologist who greatly influenced Latin American literature during its famous boom period. Carpentier was born on December 26, 1904 in Lausanne, Switzerland, to Jorge Julián Carpentier, a French architect, and Lina Valmont, a Russian language teacher. In 1921, Carpentier attended the School of Architecture of the University of Havana. When he was 18, his parents' marriage broke up and his father abandoned the family. The following year, Carpentier left his studies and tried to find work to support his mother. He turned to journalism, working for the Cuban newspapers Carteles and Social. He also studied music. Carpentier was struggling with cancer as he completed his final novel, El arpa y la sombra, and finally died in Paris on April 24, 1980. His remains were returned to Cuba for interment in the Colon Cemetery, Havana.