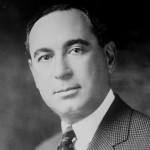 He was born in Freiburg, Germany when his American parents Morris and Nettie Heidenheimer Davis Lasker were visiting their homeland; he was raised in Galveston, Texas, where Morris was the president of several banks. He started out as a newspaper reporter while a teenager, but his father persuaded him to move to Chicago to try an advertising position at Lord & Thomas advertising agency, which he did in 1898. After he worked as an office boy for a year, one of the agency's salesmen left, and Lasker acquired his territory. It was during this time that Lasker created his first campaign. He hired a friend, Eugene Katz, to write the copy for a series of Wilson Ear Drum Company ads. They featured a photograph of a man cupping his ear. George Wilson, president of the Ear Drum company, adopted the ads and sales increased.
When Lord retired in 1903, Lasker purchased his share and became a partner. He purchased the firm in 1912 at the age of 32. Chicago, along with New York, was the center of the nation's advertising industry. Lasker, known as the "father of modern advertising" made Chicago his base 1898-1942. As head of the Lord and Thomas agency, Lasker devised a copywriting technique that appealed directly to the psychology of the consumer. Lasker was an early owner of the Chicago Cubs baseball team. He acquired an interest in the team in 1916 then soon purchased majority control. He was the original planner for the Lasker Plan, a report that recommended baseball's governing authority be reformed which led to the creation of the office of the Commissioner of Baseball, and was responsible, along with his business partner Charles Weeghman, for moving the Cubs into the club's current home, Wrigley Field. In 1925, he sold the team to one of his minor partners, William Wrigley Jr.
On May 30, 1952 he died in New York at the age of 73.[1] Albert Lasker is interred in a private mausoleum at Sleepy Hollow Cemetery in Sleepy Hollow, NY.