We made a deal that was acceptable to us. We got paid very handsomely for our final season.

Comments on: "Jason Alexander Quotes: We made a deal that was acceptable to us. We got paid very..." 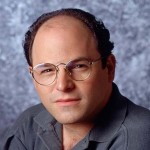