There were scenes that just for length purposes, and knowing that the attention span of kids is not great, don't make it much longer than about 90 minutes

Comments on: "John Badham Quotes: There were scenes that just for length purposes, and knowing that the attention..." 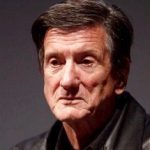