Is Elizabeth Taylor fat? Her favorite food is seconds. 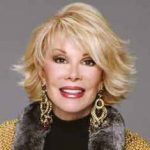 Joan Alexandra Molinsky, widely known as Joan Rivers was born in Brooklyn, New York City, New York, USA. She was an American comedian, actress, writer, film director, and talk show host. She earned a BA degree in English literature and anthropology from Barnard College in 1954. Her role in several films include: The Swimmer, Rabbit Test (also director, writer), Serial Mom, Goosed, The Intern, First Daughter, Iron Man 3, and Mostly Ghostly: Have You Met My Ghoulfriend?. Her role in television include: The Late Show (talk show host ), The Joan Rivers Show (Won- Daytime Emmy Award for Outstanding Talk Show Host in 1990), and Fashion Police (talk show host). She was nominated in 1984 for a Grammy Award for her album What Becomes a Semi-Legend Most? She was nominated in 1994 for the Tony Award for Best Actress in a Play for her performance of the title role in Sally Marr...and Her Escorts. She wrote several books include: Having a Baby Can Be a Scream, Enter talking (memoir, with Richard Meryman), Still Talking (memoir, with Richard Meryman), From Mother to Daughter, Don't Count the Candles, and Diary of a Mad Diva (Won- Grammy Award for Best Spoken Word Album for her book in 2015).