At the start, Connie wrote the Polly and Sybil roles, and she and I wrote Basil together.

Comments on: "John Cleese Quotes: At the start, Connie wrote the Polly and Sybil roles, and she and..." 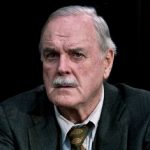