I do miss sometimes being onstage, because when I do film and television, it's usually so brief and funny.

Comments on: "John Michael Higgins Quotes: I do miss sometimes being onstage, because when I do film and television,..." 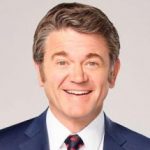