I am not at all a chocoholic. I would rather eat anchovy toast.

Comments on: "Joanne Harris Quotes: I am not at all a chocoholic. I would rather eat anchovy toast." 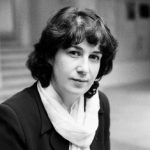 Joanne Michèle Sylvie Harris was born in Barnsley, South Yorkshire, England. She is an English novelist, known for her award-winning novel Chocolat (Won- Creative Freedom Award 2000, Whittaker Gold Award 2001). It was later turned into the 2000 film Chocolat. She earned a BA degree from St. Catharine's College, Cambridge University in 1984. She also taught at Sheffield University, lecturing on aspects of French literature and film. She has written other novels include: The Evil Seed, Sleep, Pale Sister, Blackberry Wine, Five Quarters of the Orange, Coastliners, Holy Fools, Gentlemen & Players (Shortlisted for the Edgar Award 2007), The Lollipop Shoes, Runemarks, Runelight, and Peaches for Monsieur le Curé.