Women want honesty but sometimes get upset if you are honest, so you need to know when to be honest.

Comments on: "George Hamilton Quotes: Women want honesty but sometimes get upset if you are honest, so you..." 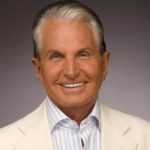