I do get scared, but I think - like it says in another book I've read - feel the fear and do it anyway. I try to have courage, pray a little bit and work through it. I'd rather try, even if I fail.

Comments on: "Geri Halliwell Quotes: I do get scared, but I think - like it says in another..." 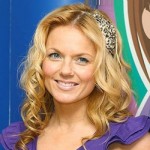